From the book, Mostly Harmless by Douglas Adams

"Now logic is a wonderful thing but it has, as the processes of evolution discovered, certain drawbacks.  Anything that thinks logically can be fooled by something else which thinks at least as logically as it does. The easiest way to fool a completely logical robot is to feed it the same stimulus sequence over and over again so it gets locked in a loop. This was best demonstrated by the famous Herring Sandwich experiments conducted millennia ago at MISPWOSO (The MaxiMegalon Institute of Slowly and Painfully Working Out the Surprisingly Obvious).

The scientists at the Institute thus discovered the driving force behind all change, development and innovation in life, which was this: herring sandwiches.

They published a paper to this effect, which was widely criticised as being extremely stupid.

They checked their figures and realised that what they had actually discovered was `boredom', or rather, the practical function of boredom.

Vast wodges of complex computer code governing robot behaviour in all possible contingencies could be replaced very simply. All that robots needed was the capacity to be either bored or happy, and a few conditions that needed to be satisfied in order to bring those states about. They would then work the rest out for themselves."

Another political frenzy is now finally behind us. It's a chance for voice over artists such as myself to take a break from what I like to call 30 second opinionated information storms and get back to our corporate narration, car commercials, audio books, eLearning projects, and other "normal" voice work.

Almost everyone is glad for the eye of the perpetual political hurricane.

Did you know that over $5.2 Billion was spent on the 2018 midterm elections?

If creative content producers were like retail, then elections would be like our Christmas shopping season because the lion's share of that money went to telling the story of who each candidate was and what they brought to the table. 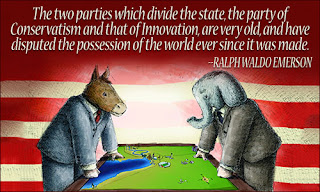 Working in the voice over industry these past years, I've voiced some political ads that have aligned with my personal beliefs and values. I've also voiced what I would guess to roughly be an equal amount of others that were not in line with my worldview.

Some of my friends ask how I could do that, which is really strange to me because they never ask about how I can say in a convincing tone of voice that a deodorant can "revitalize your delicate skin."

Democrats and Republicans are masters at keeping us stimulated and riled up for what amounts to no really good purpose other than our amygdala  gets a big boost in blood flow. Now it's also true that  companies that sell, create, or distribute advertising to a particular demographic get a whole bunch of corporate PAC and grassroots donation money in their bank accounts, and people like me get to make our monthly mortgage payments, but for the most part, the average person doesn't benefit at all

So if it's pointless, WHY do we keep doing it?

We're like the kid surrounded by toys and games constantly complaining that there is nothing to do.

We complain that there is not enough money to break out of the current political system while ordinary people give the Democrats $750 Million and the Republicans $312 Million in donations just for the US House of Representatives races!!

$1.6 BILLION was donated by individuals for the House and Senate races alone. By comparison, total PAC money for those races added up to a little over $467 Million

Science has already shown us how to have an effectively persuasive dialogue with those with whom we have fundamental disagreements.

There is no reason to avoid discussion of any political issue at a family gathering as long as you use empathy, mirroring techniques, and a dose of good reliable widely sourced research on your topic.

But still here we are.

On the couch with the remote.

"Give me something to be upset about"

"Tell me who to vote for"

Modern political consultants would never have given us Abraham Lincoln, Thomas Jefferson, Franklin D Roosevelt, or Woodrow Wilson. (To be fair, they almost certainly would have given us George Washington simply because of his outstanding popularity at the time.)

The next great president isn't going to be found by a political party, they're going to come from a neighborhood cleanup event or a parent teacher conference.

Our greatest leaders think of ways to balance Christmas shopping with the mortgage payment.

The people who inspire us are the people around us everyday.

Ask yourself, "who do I know that would make a great congressional representative?"

Ask your neighbors and friends who they know that would be good as a state senator.

On airplanes they give you a choice of 2 pre-prepared meals, but there is no rule against bringing something you might like better on board (as long as you buy it past the security gate). We just usually don't think about that option.

Ask yourself why you want someone else to tell you what to do when you're surrounded by so many wonderful and useful things.

And we'll have a party to celebrate.